810A & 810B Appearance Measurement Systems 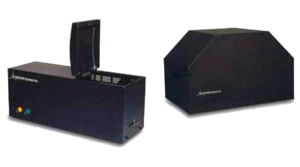 TRICOR’s Appearance Measurement Systems measure the brightness of illuminated samples and the reflectance of surfaces. Each system’s chamber offers a controlled environment for a calibrated video camera and lighting, which allows measurement data to be obtained under user-specified conditions. Presently being used successfully to quantify haze and micro pitting on various products, the system’s are easily customized to measure specific appearance characteristics of countless products.

The 810A and 810B generates a 640 x 480 pixel image with a digitized 256 gray scale. They use TRICOR’s Eyeppearance® software, a Windows™ XP or later compatible PC-based software system, to provide analysis tools used to establish photometric levels for an image.

A user-friendly Windows™ interface offers many menu options for analyzing the acquired gray scale image; however, the real potential of Eyeppearance® is realized when a calibration transform file is loaded for the image. The calibration transform translates the relative gray levels into absolute radiometric levels. Pixel radiance levels and histogram distributions are given in photopic units.

Another powerful feature of Eyeppearance® is its ability to define up to 256 regions of interest. Each region of interest is an irregularly shaped region as outlined by the user using the mouse. From this region an active subset can be selected, which establishes a new histogram distribution and restricts some of the menu options to function only upon this active region.

For more information on this or any other of TRICOR’s products or services please Contact Us
Copyright ©2020 — All rights reserved.
Hosted and Programmed by anARTIST unleashed