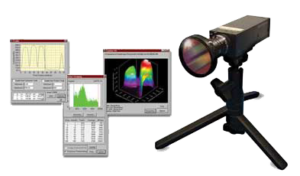 The Model 823 Video Photometer measures the absolute brightness of any size sample or scene and pro-vides quantitative data in fL or cd/m2. The 823 employs a progressive scan non-interlaced USB 2.0 camera to measure the performance of lamps, LEDs, backlit panels, control switches, etc. It also quantifies paint reflectance, hemi-spherical reflectance, micropitting, mirror reflective haze, contrast, and other appearance characteristics. The 823 generates a 1024 x 768-pixel image with a digitized 10 bit gray scale. It uses TRICOR’s Windows® compatible PC-based software system, to provide analysis tools used to establish photometric levels for an image. A user-friendly Windows® interface offers many menu options for analyzing the acquired gray scale image; however, the real potential of Eyeppearance+™ is realized when a calibration transform file is loaded for the image. The calibration transform translates the relative gray levels into absolute radiometric levels. Pixel radiance levels and histogram distributions are given in photopic units. Menu options, such as the Enhance option, provide a close coupling of the image data and the histogram distribution. The image is highlighted in green for a given section of the histogram. The user can use the mouse to quickly change the highlighted radiance levels in bandwidth and position on the histogram distribution. Also, false coloring can be applied to the image allowing the user to readily see those areas below, above, and within the user- specified tolerance band. Quantitative values associated with the highlighted area(s) are then displayed on the PC screen. Another powerful feature of Eyeppearance+™ is its ability to define up to 254 regions of interest. Each region of interest may be any region as outlined by the user using the mouse. From this region an active subset can be selected, which establishes a new histogram distribution and limits image analysis to this active region only.

For more information on this or any other of TRICOR’s products or services please Contact Us
Copyright ©2020 — All rights reserved.
Hosted and Programmed by anARTIST unleashed