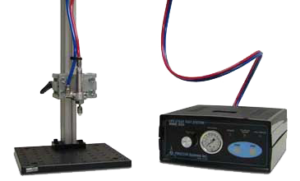 The Model 933A Life Cycle Tester is a low cost, generic test platform used to perform cycling of keypads, keyboards, membranes, switches, or any product requiring fatigue testing. The system consists of control box, air cylinder with test stand, and software installed by the user in a standard computer. It features a single analog channel used to measure contact resistance and bounce (expandable to four), and an air cylinder with a silicone rubber tip to simulate activation of a finger. The air cylinder may be supplied in various throw lengths, diameters even environmentally sealed. The control box allows for adjusting the velocity, force and acceleration of the cylinder.

A user-friendly Windows® software environment allows the user to create test parameters for the unit under test (UUT), i.e., specified resistance, bounce time, number of cycles, allowed fails, cycles/second, etc. The configuration is then transferred to the control box for stand-alone or PC based operation.

Testing of the UUT is as simple as operating to a predefined number of cycles. During cycling the 933A may test for: resistance, contact bounce, total number of fails, and total consecutive fails and then compare test results to the user specified parameters. The system may stop testing if a specified number, or consecutive number of failures of test parameters have occurred.

The 933A is a cost-effective, fast-acting tool, which is easily operated and modified to test a variety of parameters and products.

For inquires in Europe or South America please see contact information below. All other inquires contact TRICOR directly